(Editor’s Note: With the presence of a MegaRace reboot still in the air I feel that it is appropriate to elaborate on this little cul de sac in gaming history. Regardless of the relevance, it is part of gaming history and that means it is worth preserving.)

A higher resolution still of pre-rendered CGI of Drive Fractalus.

Drive Fractalus was a game being developed by the France based development studio Cryo Interactive as early as 1992. This working project was to feature full motion video with an amalgamation of live motion principle photography and CGI elements being composites of both using blue screen techniques. It was supposedly going to be a driving or racing title that would push FMV utilization in a bold new direction.

An odd looking space craft being eclipsed by a distant star.

Unfortunately, there is very little information on this title and there are only two sources of media that point to the existence of Drive Fractalus. In an issue of the French video game magazine Joystick in 1993 there was a two page news article that talked about Drive Fractalus which consists of interviews and stills taken from the FMV sequences that were being developed for the game. In Europe it would seem that this game was a cause for much excitement seeing that the FMV game craze was in full swing during the mid 1990s. These stills show off some interesting futuristic Dystopian environments along with the vehicle driving around. This was all pre-rendered CGI and none of the stills appear to be in-game in which interaction is possible. The other piece of media that shows off Drive Fractalus is a small twelve second video clip pulled from the old art Television program that aired in France during the 1990s in an episode titled ‘Eye of the Storm’. The clip aired in the episode circa 1993. The more interesting part of this cancelled video game is that it bares an uncanny resemblance to the old PC game MegaRace. In fact, Drive Fractalus is MegaRace.

MegaRace is a game and franchise that has sadly fallen into obscurity after the turn of the last decade. It was a racing car combat game series that acted as a showcase for full motion video graphics as well as pre-rendered CGI visuals. The game has been ported to a few platforms like the Sega CD and the 3DO Multiplayer system. Ever since making a splash in 1994 and eventually being bundled with select multimedia focused PCs like the Packard Bell Legend, Megarace has developed a cult following. This title is also known for its 90’s cheese factor that is reinforced by the live motion FMV cut scenes with the fake TV host Lance Boyle played by Christian Erickson.

There is a great deal of evidence that reveals that MegaRace began life as Drive Fractalus. To start, one could take a deeper look into the small clip of footage of Drive Fractalus. This clip came out a full year before the PC release of Megarace and shows a pre-rendered sequence in which a futuristic car drives in a narrow speedway over steering and power sliding through some curves. The different dates of the clip’s screening and MegaRace’s release do not seem to have any relation at first. When taking pieces of the clip and comparing them to the various VWBT cut scenes one can see that the clip is actually embedded in the cut scene within MegaRace where Lance Boyle says, “It’s Vulture time again and their feathers are still kind of ruffled”. The clip is actually being displayed on two of the video monitors in one of the broadcast rooms of the scene. 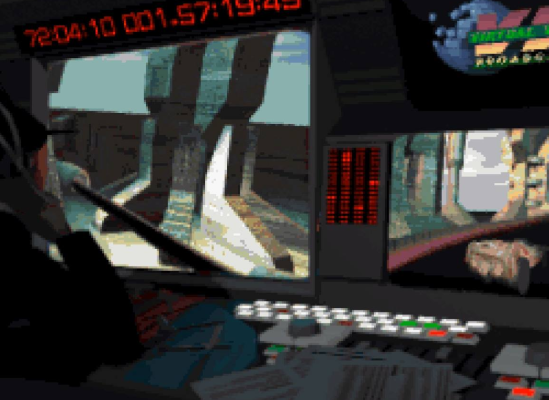 This is a still taken from MegaRace on PC. On the two monitors you can see the video versions of the stills shown in Joystick Magazine as well as the French art show episode called ‘Eye of the Storm’.

The second thing to look at is screen shots taken for the magazine news article. There are several stills that depict a large skyscraper with four large spikes protruding from each side of the building. This structure along with some of the surrounding buildings in the stills were actually reused in one of the New San levels called the Uptown Speedway. It is actually visible at the start of the race. There are some minor differences between the DF and MR versions of the spike tower in terms of color. The MegaRace version is a prestine white as where the Drive Fractalus iteration is a metalic gray.

You can see the “Spiked Tower” in this shot.”

This eventually got recycled in MegaRace.

Another carryover from Drive Fractalus to MegaRace is the little space ships that fly about the virtual world of Fractilian Space. These are the vessels that have the cylindrical thrusters on the end of each wing. These can also be found in the same news story and are seen in the full sequence in the art TV show episode ‘Eye of the Storm’. Even the term Fractilian, a term thrown around by Lance Boyle of MegaRace, is part of the title Drive Factalus.

These same ships are peppered throughout the various cut scenes in MegaRace.

All of this evidence points to two different theories. The first theory is that Drive Fractalus was indeed its own game and may have been canceled. The assets from the project may have been cannibalized and retooled for use in MegaRace. However, the more plausible theory is that Drive Fractalus was the original name for MegaRace or was a working title. Many development studios will put a working title on a game without the intention of that name being a permanent fixture. In some cases the name sticks and in others it does not. It is certain that Drive Fractalus’ name was changed to MegaRace at some point during development. This may have been because Drive Fractalus is just an odd name. Another reason for the change could be that the game’s car combat mechanics were likened to the movie Death Race 2000 and they could not use that exact name for copyright reasons. Thus, the team named it MegaRace. 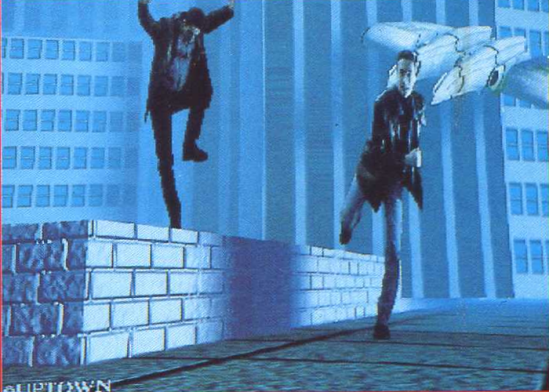 A shot of composite footage of live motion actors on a CGI background much like what is seen with the cut scenes featuring Christian Erickson.

With all of these connections drawn between the finished MegaRace and the prototype of Drive Fractalus it is clear that these two titles are connected. Some may argue that they are one and the same. While some of the other aspect of the game are not present in Drive Fractalus like Lance Boyle and other car types, it is still very fascinating to see the same creative DNA that these two games have in common. 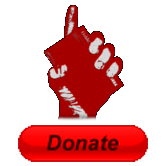